w'lfg'ng (speak: Wolfgang) is a Munich, Germany based outerwear brand creating functional blousons, raincoats, and down jackets for men and women. We aim to create subtle everyday jackets with hidden performance functions. The results are highly developed garments for the great outdoors with grounded aesthetics in a metropolitan environment. It’s the well-tailored city coat with the performance of big mountain equipment. Living at the foot of the Alps, we draw inspiration from the needs of mountaineering outerwear and translate it to our own everyday pieces.

Fabrics make the difference
Back in 2010 when we started our first temporary shop in the heart of Munich, we believed the fabrics made the difference. Now with w'lfg'ng, we are always on the hunt for premium fabrics from weavers with a long standing tradition and look out for the experts in their fields. That’s why we employ fabrics like Swiss EtaProof® cotton, traditional Austrian Loden-Steiner and Leichtfried wool, or refer to The British Millerain for waxed cottons. Using a mix of innovative and traditional textiles and construction techniques, we pair technical performance with classically tailored silhouettes.

we create jackets to live in
with a pure, simple and focused appeal
we use our hands for innovative cutting
to be enjoyed whatever the weather

WE MAKE FUNCTIONAL OUTERWEAR FOR OUR FRIENDS AND OURSELVES

For more information about the brand or any inquiries, please contact Wolfgang at:
hello@wlfgng.com 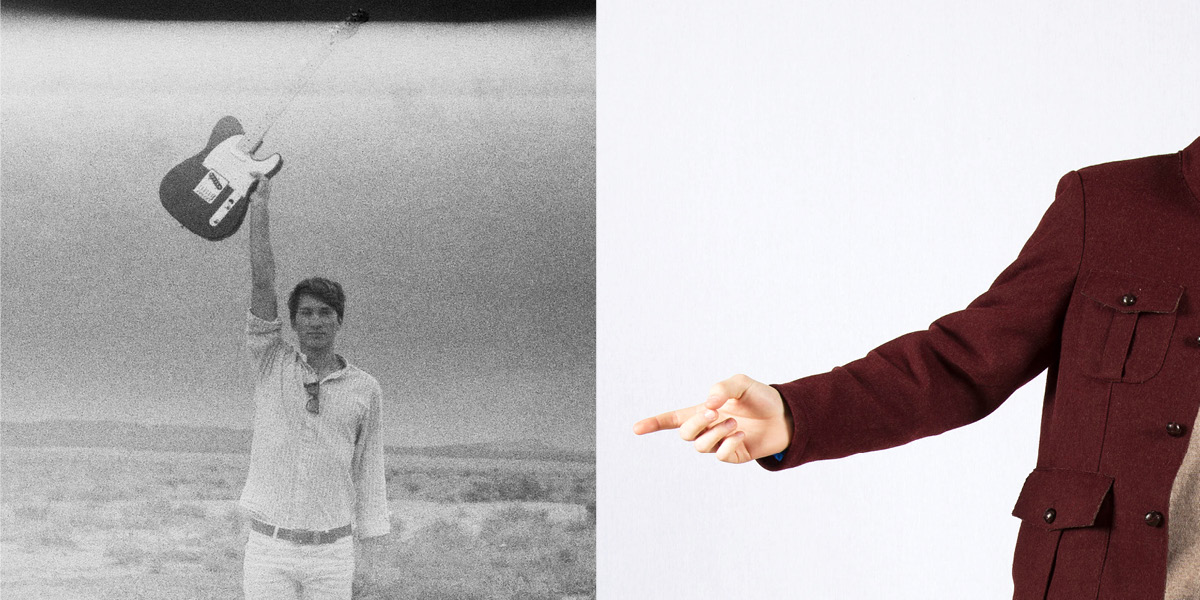 You get up before sunrise. The „cabin“, a wooden blockhouse. It looks, smells and feels like a little cottage in the Alps. You slip on your coat, and when you go outside, it’s pretty cold. 7200 feet above sea level. You stand still, there are no rocks nor trees surrounding you.
The horizon is three days away and the earth under your feet is dry and dusty. You are standing on a flat plain, in the middle of nowhere.
360 degrees of nothingness. The sun rises and there it is; luminescent. one mile by one kilometre – total bliss.

We spend a few days in a wooden blockhouse at the other end of the world, located in the high desert at an elevation of 7200 feet and situated on a flat plain in New Mexico. Although it was quite hot during daytime the mornings and evenings became very cold, which made us think of some traditional garments worn in the mountains back home. Spending those days away from civilisation and encapsulated from the busy world we chatted about garments to reflect this idea of pure and rough nature. In the end we came up with a line up of parkers and winter blousons in Loden fabric padded with real down. Loden traditionally used to be the most durable cloth produced by peasants in Bavaria and Austria. It is a thick, water-resistant and wind-proof woollen material with a short pile. To produce Loden fabric, strong yarns are woven loosely into cloth which then undergoes a lengthy process of shrinking, eventually acquiring the texture of felt and becoming quite dense. It is then brushed and the nap is clipped, a process which is repeated a number of times until the fabric provides good warmth for the weight, and is relatively supple, windproof, and extremely durable. Today there are only a few specialist weavers left in Austria that still produce Loden in different qualities. We chose Loden Steiner and Leichtfried wools because of their incomparable fine fabrics and the added benefit of an additional water repellent finishing. For us this Loden fabric is a piece of homeland but sitting in the dust of New Mexico it is still contemporary and has it’s eligibility even a few thousand miles from home. 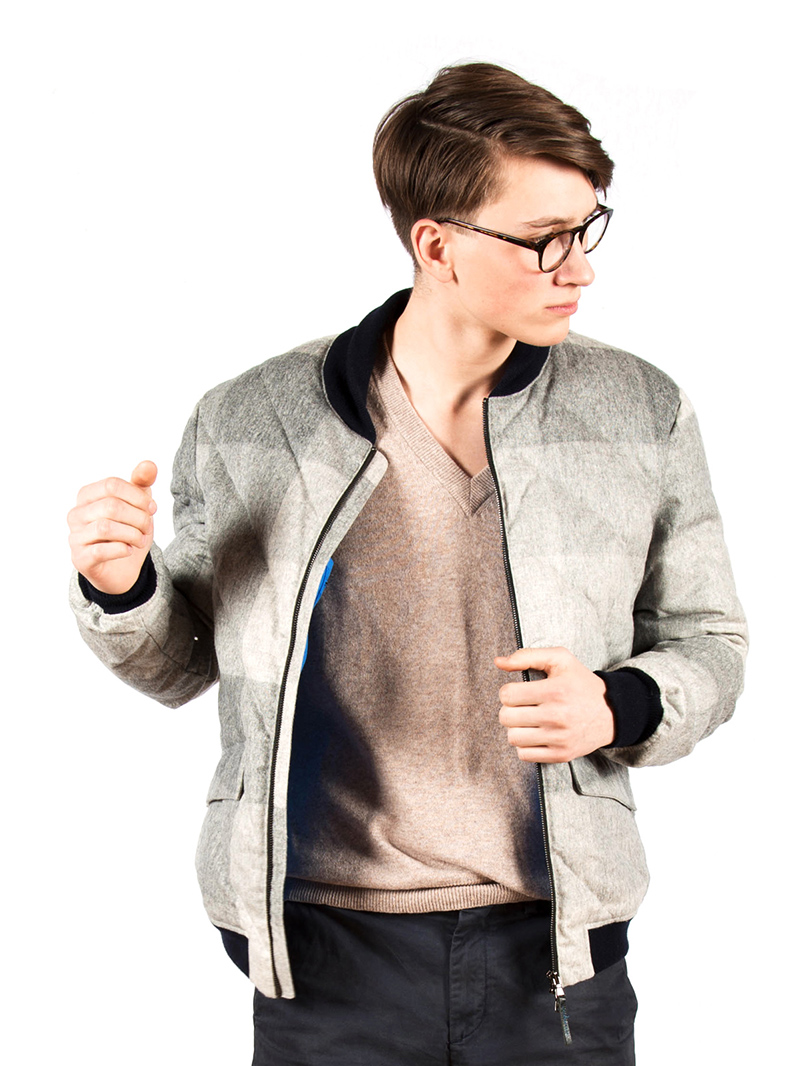 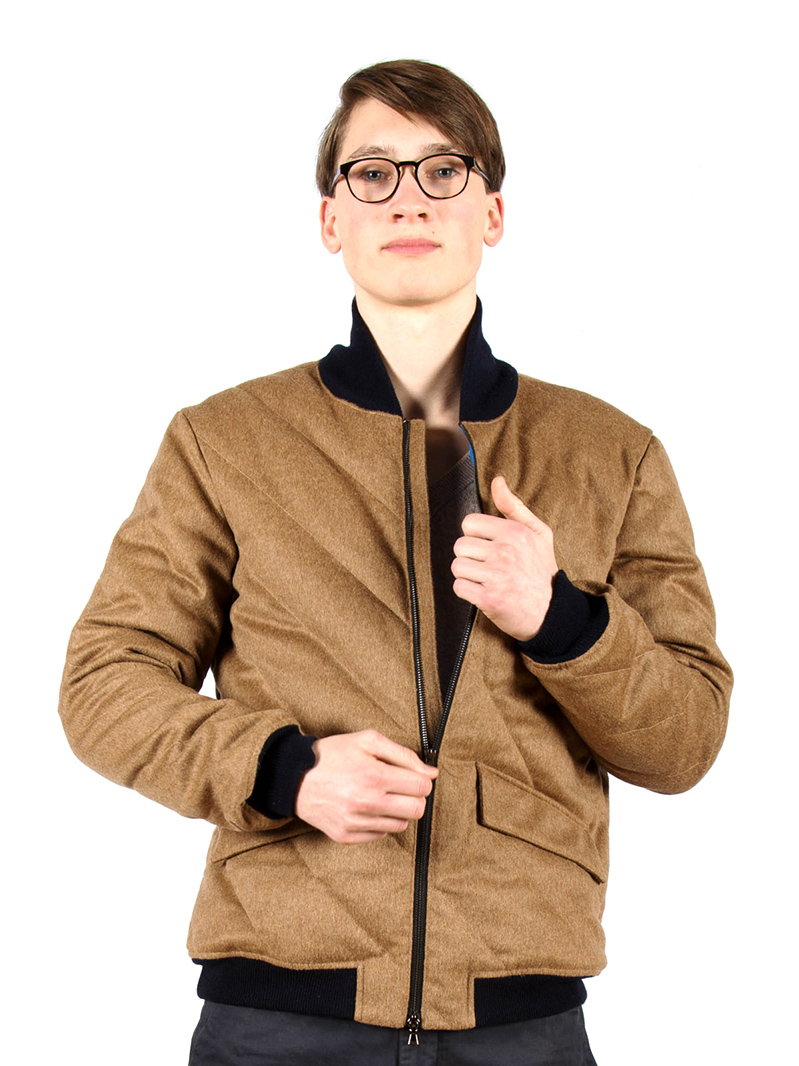 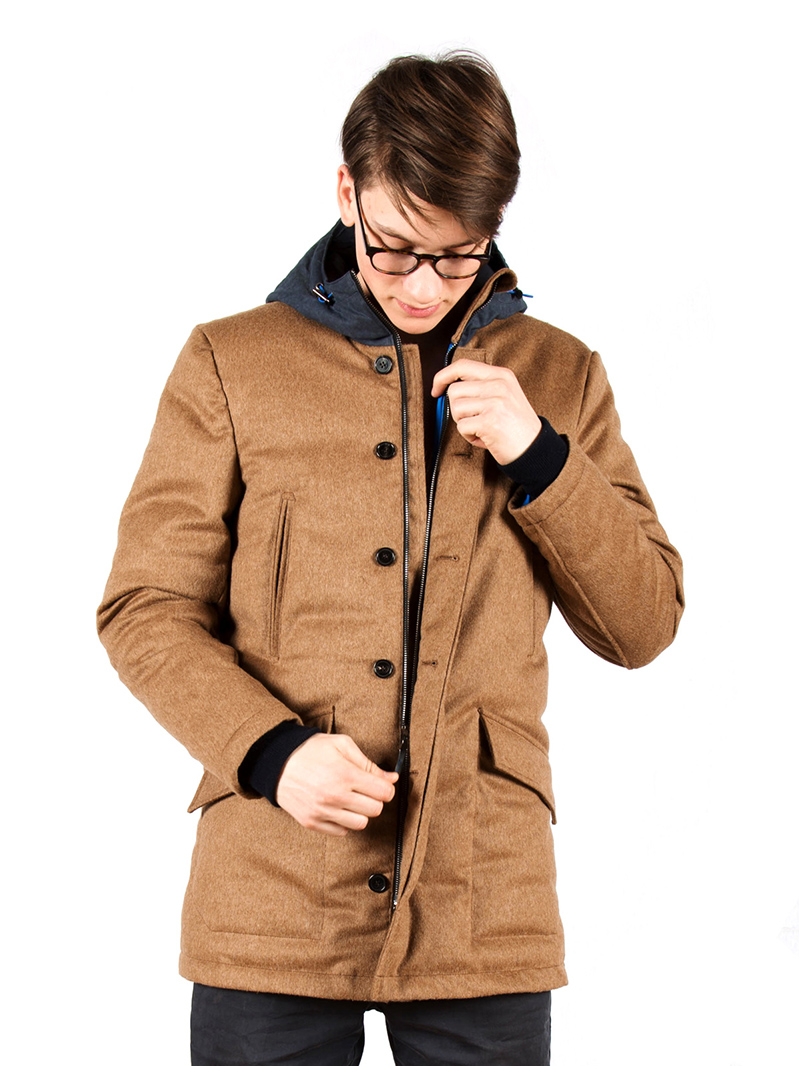 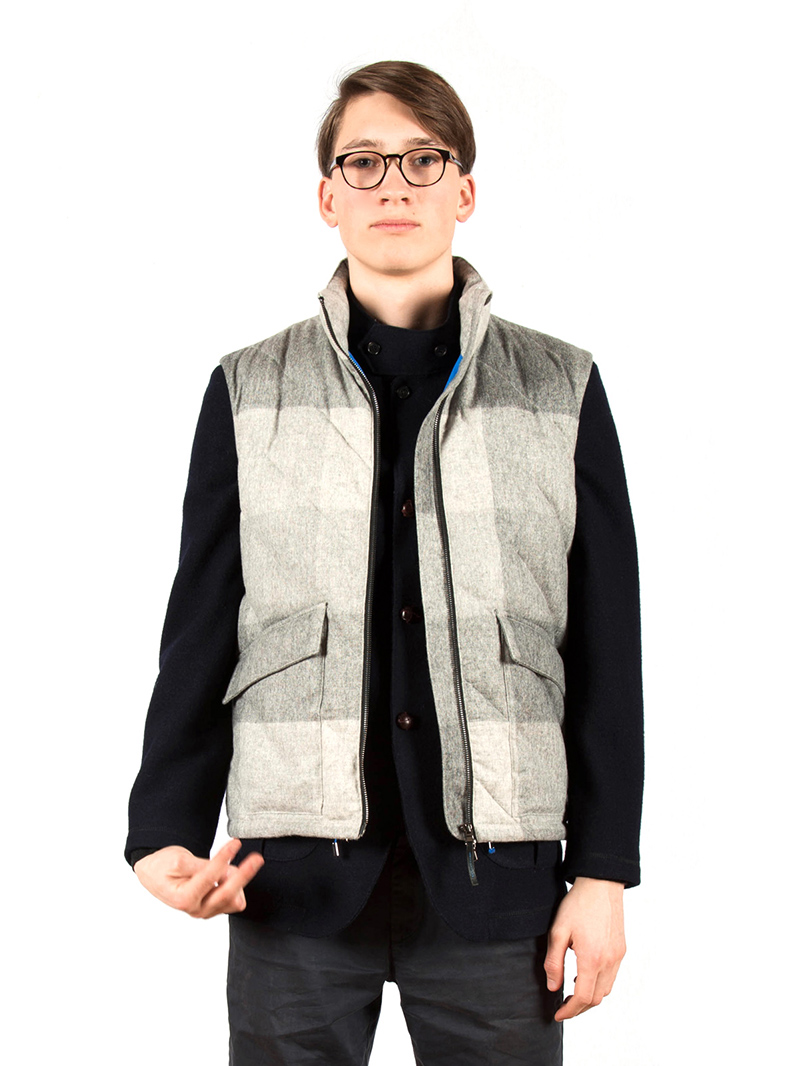 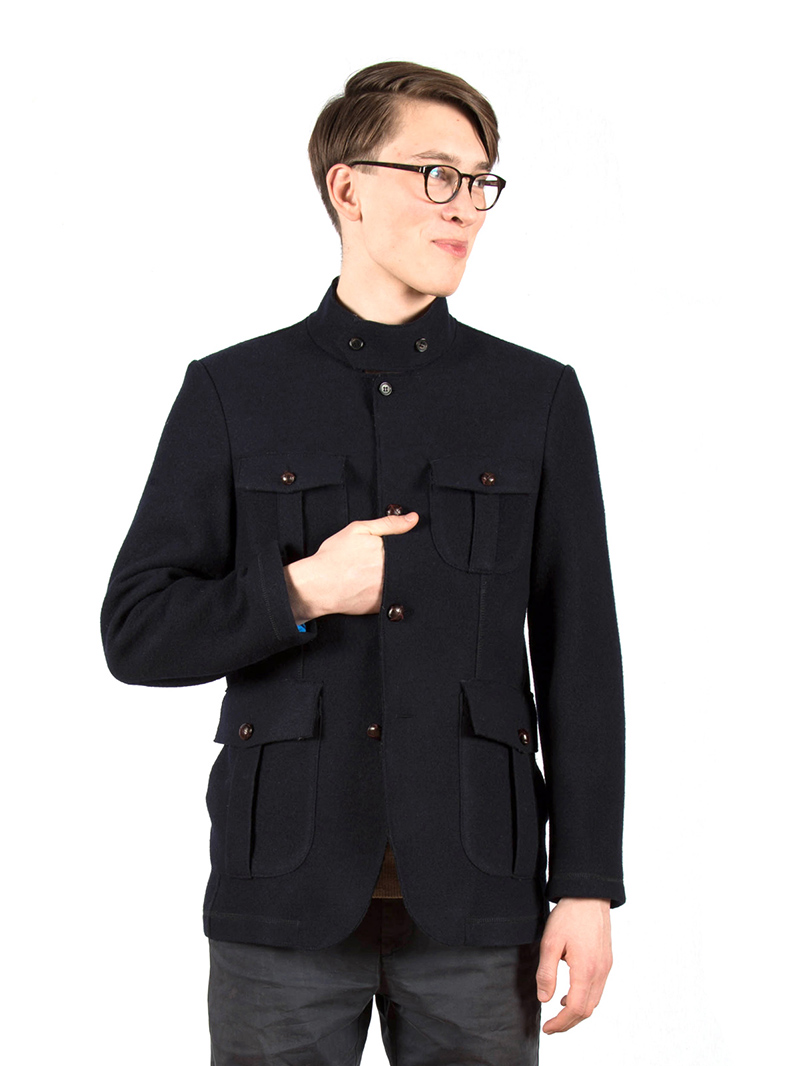 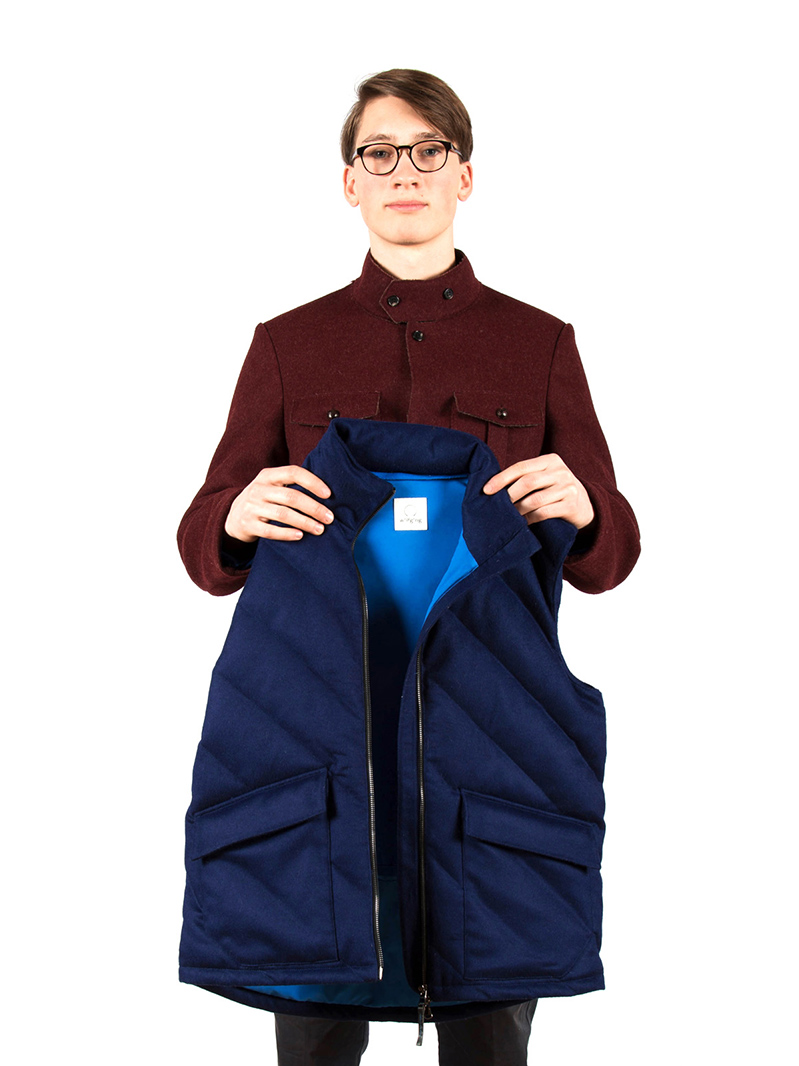 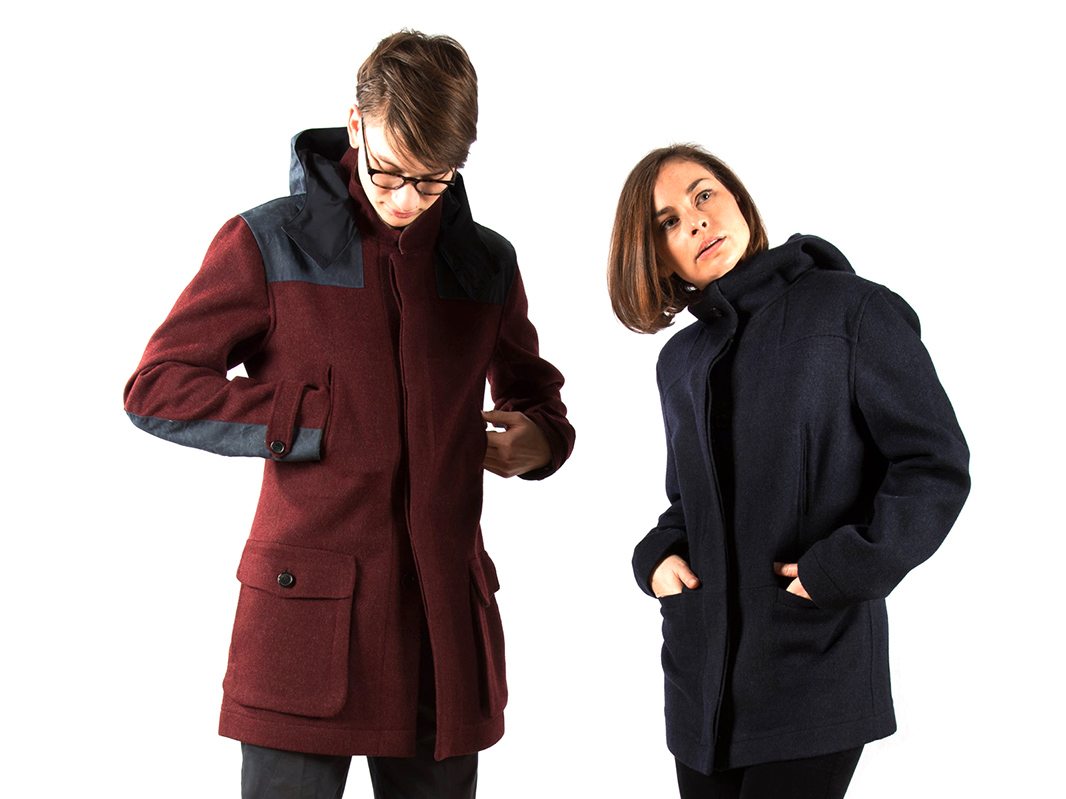 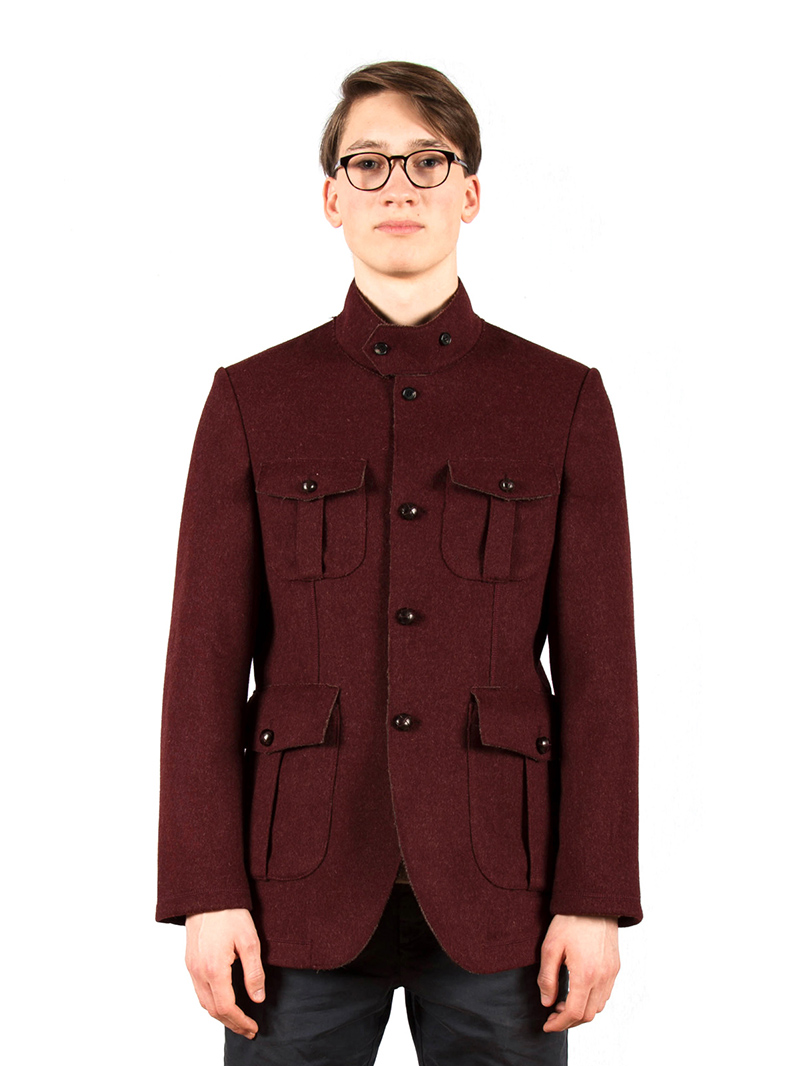 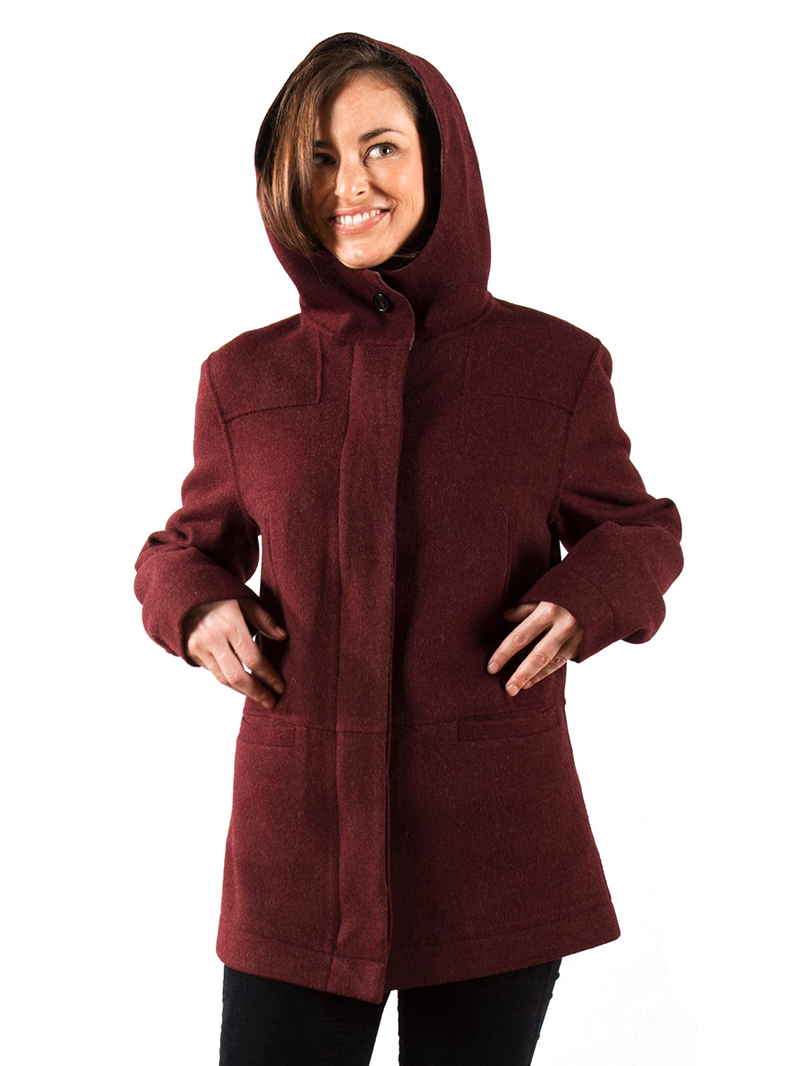 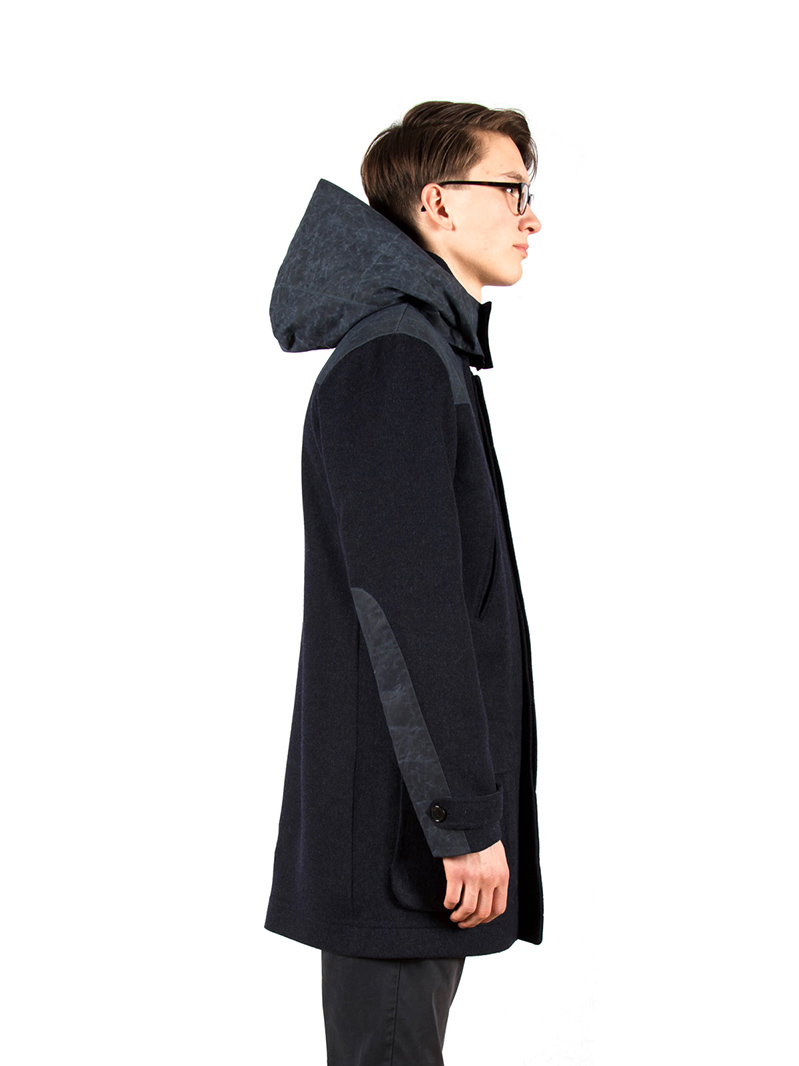 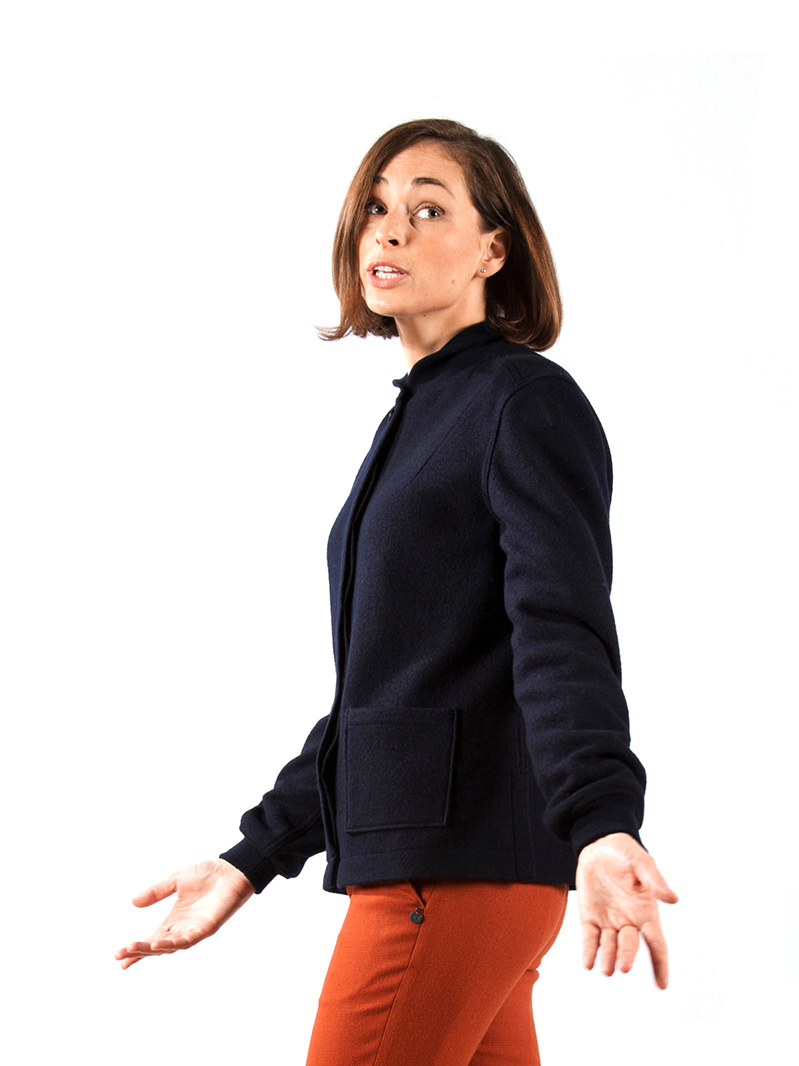 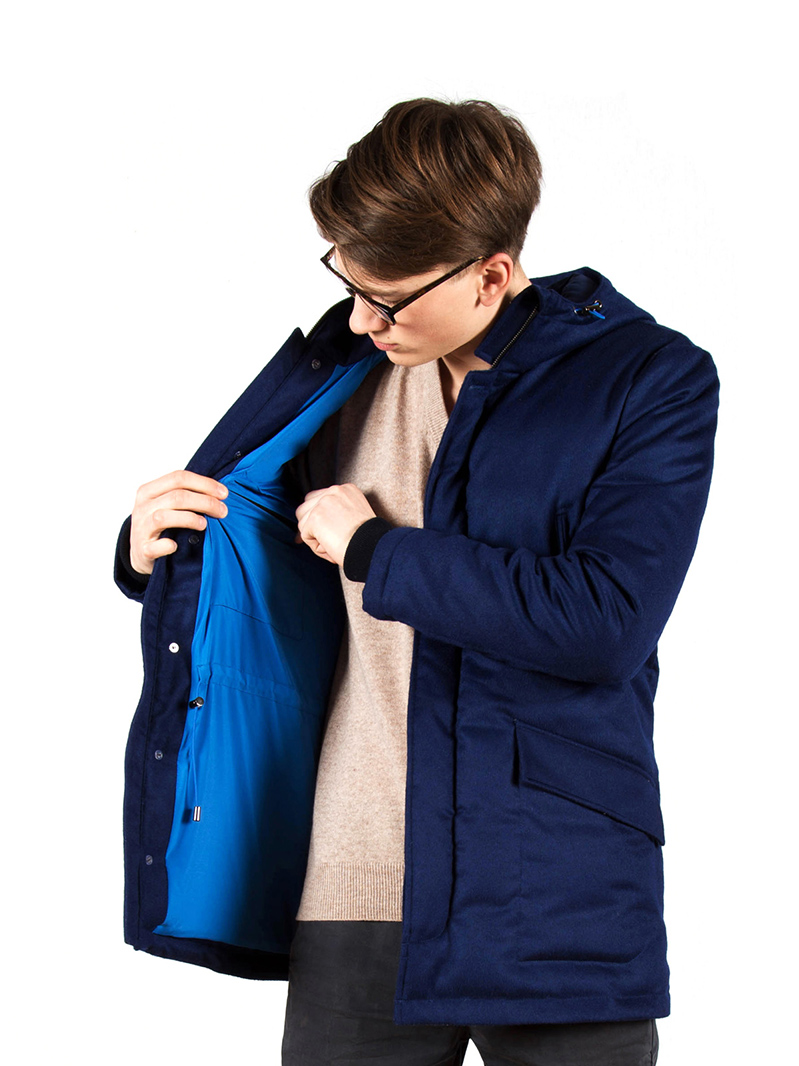 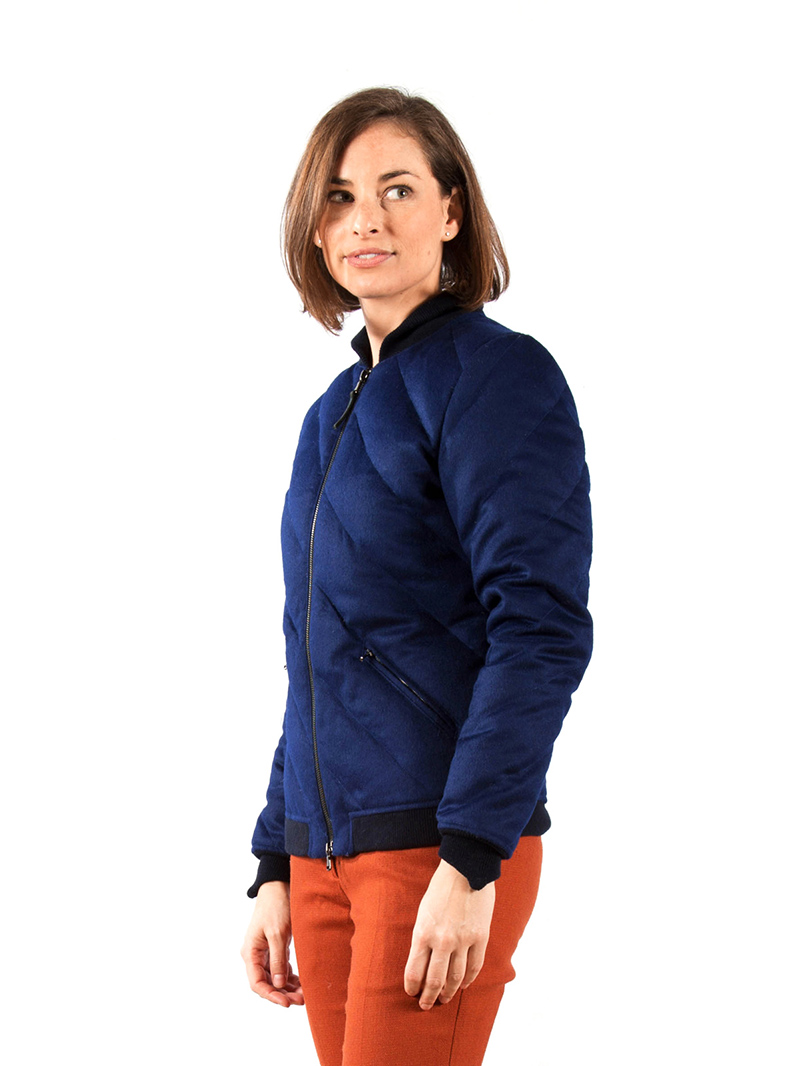